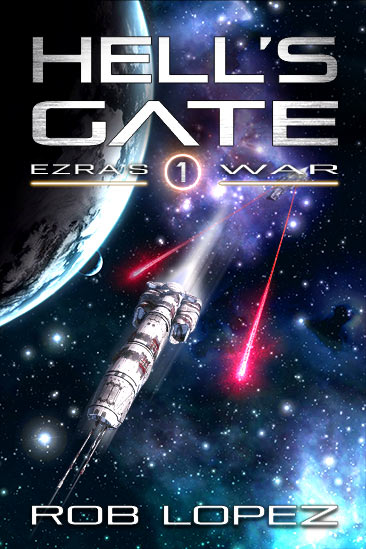 A reluctant hero will rise from the shadows and shake the pillars of power in the galaxy.

Commander Michael Ezra is a pariah in the Outer Systems Alliance. Cold-blooded, detached and reckless, he’s considered a danger to the crews that serve under him. The war against the alien Ravagers, however, is not going well, and Ezra is sent out one more time. He must prove his worth by undertaking what amounts to a suicide mission.

But Ezra is a pawn in a much larger game, and the mission is not all it seems. As the Alliance prepares its assault against a hitherto unknown alien planet, unseen hands work to unfold a hidden agenda in the outer colonies. Estranged from his friends and distrusted by his crew, Ezra fights a lonely war, against both the enemy and his own superiors. Few know who he really is, or why he became that way, but he alone knows the dark fate that awaits them all.

When the time comes, he could become mankind’s greatest hope. First, however, he must survive the hell they are about to be plunged into. 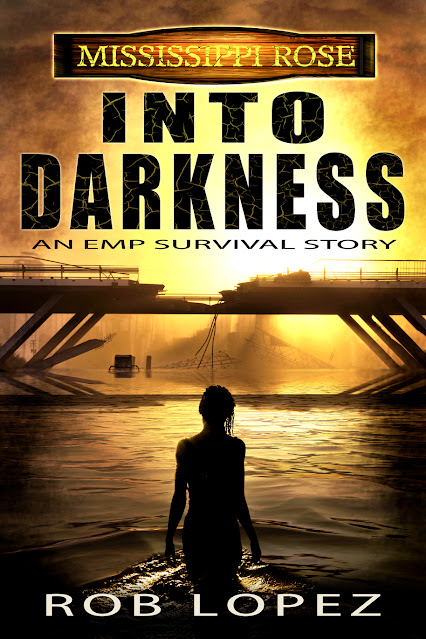 In post-apocalypse America, one woman will become a legend.

Darla Griffiths is a riverboat captain, giving rides to tourists on her steamboat out of New Orleans. When a devastating solar storm cripples the grid and leaves the local nuclear power plant close to meltdown, Darla is one of the few people who can safely evacuate the citizens of New Orleans before it is too late.

But when anarchy reigns and a hurricane threatens the city, Darla and her crew must risk their lives to save others, and Darla will be forced to confront the darkness of her own past, and the deadly secrets that imperil them all.

Into Darkness is the first of a new series of adventures on the Mississippi River from the author of Solar Storm. Contains moderate language and graphic action scenes. 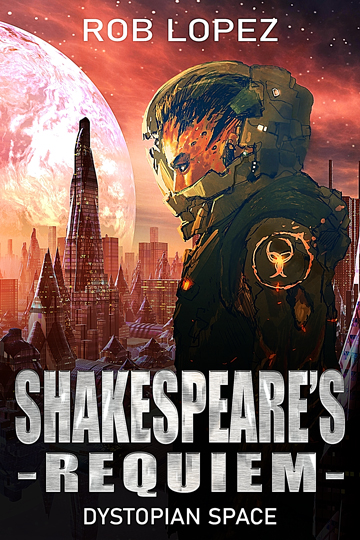 They thought he was dead. They’re going to wish he was.

The colonies on Callisto lie in ruins, the survivors living in fear of the militias who have taken over. Refugees hide in underground shelters, struggling to cope as supplies run low. Their only hope lies with the negotiations taking place in the shattered city of Cielo, where envoys from Earth are trying to bring an end to the disastrous civil war. There is only one problem, and his name is Shakespeare Cruz.

Shakespeare is one of the refugees, and he’s been on the run for seven years. The part he played in the conflict remains a mystery, and he won’t talk about it. He only hopes that certain people have forgotten about him, so he can raise his daughter in peace.

But somebody is coming for him, somebody who remembers exactly what he did, and he’s going to make Shakespeare pay with more than just his life. Shakespeare’s secret past is about to be blown open and a titanic struggle will begin that could decide the fate of the moon. 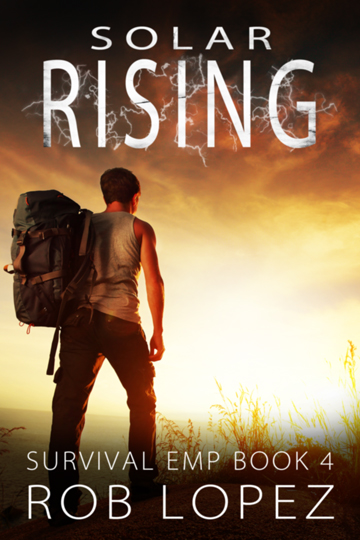 In their darkest hour, the survivors must rally if they’re to get their freedom back.Outsmarted and outgunned, Rick Nolan has reached his lowest point. His wife has been taken prisoner by the new Asheville regime, his best friend is dying and his people are scattered and in hiding. His arch-nemesis, Major Connors, is about to consolidate his tyrannical grip on the region.Branded an outlaw and forced into the mountains, Rick has to do more than just survive. He has to fight back, but the odds are against him. Torn between saving his wife and protecting his children, Rick is under pressure, and Connors isn’t done with him yet.In a deadly cat and mouse game, Rick will need every ounce of ingenuity to stay ahead of his foe, and the stakes have never been higher. One mistake and he will lose everything, and everyone, he loves.
Book 4 of the Survival EMP series.
Posted by Rob Lopez at 04:17 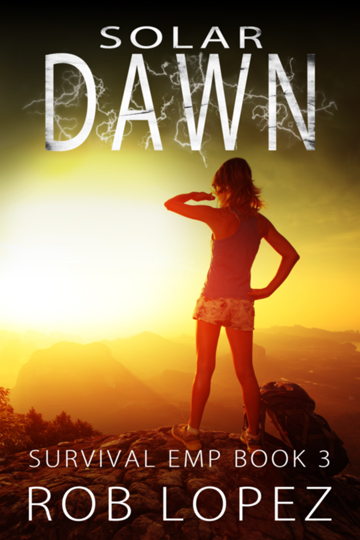 The storm has ended, winter is over and a new dawn will rise in American history. It may not be the bright future many hoped for.

Rick’s family and friends have survived the predations of raiders and the ravages of winter. Now they have to leave the radioactive city of Charlotte, striking out for the mountains. Following in the wake of previous refugees, they encounter a land picked clean of resources, with embattled settlements hostile to strangers and gangs dominating the areas in between.

Rick finds that safe havens are hard to come by, and his military experience might not be enough to keep his family safe. New forces are rising that could spell doom for them all.

Book 3 of the Survival EMP series
Posted by Rob Lopez at 12:38 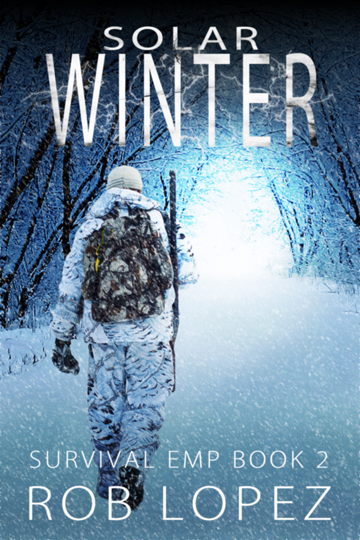 Available at Amazon and Amazon UK.

How do you survive when you haven’t prepared?

The solar storm has all but destroyed American society, and the survivors are left picking over the ruins. Rick’s family and friends face a bleak future. Winter’s coming, and with it the greatest test they’ve ever had to face together. With no supplies, and nowhere safe to bug out to, they’re starting from zero.

Forgotten skills have to be relearned, and improvised solutions are needed just to stay alive. But time is running out. With each passing week come troubling signs of a more immediate threat than hunger. Dangerous foes lurk nearby, and Rick’s tiny group cannot stay hidden forever. Ready or not, the time will come when they have to fight. Or be annihilated.

Book 2 of the Survival EMP series. 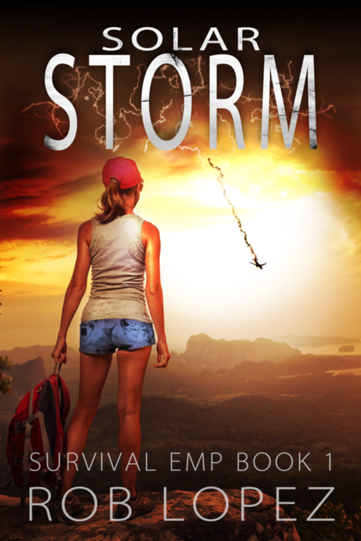 Available at Amazon and Amazon UK

When disaster strikes, a family must fight to reunite.

The biggest solar storm in recorded history will hit Earth, and the resulting EMP pulse will fry electricity grids and disable fragile electronics. Transmission wires will melt, transformers will explode, modern vehicles and aircraft will cease to work. In less than a minute, the world will be taken back two centuries.

Lauren Nolan is in New York on a business trip when the blackout hits and the transportation system grinds to a halt. Trapped in the panic that envelops the metropolis, she has find a way to get back to her two children, five hundred miles away in North Carolina. Unable to get word to them, and with society collapsing around her, she faces a long and harrowing journey on foot. Her husband is serving overseas and it looks like she might never see him again.

Sergeant Rick Nolan is in Syria on a covert ops mission against ISIS. When the solar storm wipes out his communications and his air cover, he and his small team find themselves on the same level as the enemy that surrounds them. Caught in a desperate fight for survival and forced to run, one thought is uppermost in their mind: How are they going to get home?

Book 1 of the Survival EMP series
Posted by Rob Lopez at 03:39

Rob Lopez
Author of Science Fiction and Post-Apocalypse Fiction. Welcome to my website.